AV Arts Blog recently sent some interview Q’s to Nuri Amanatullah in anticipation of his show at Sagebrush Cafe in Quartz Hill. He wrote back.

He’s calling his show PopRocks and the show is comprised of bold and colorful digital drawings. We started out asking about Amanatullah’s inspiration for the work featured in the show. 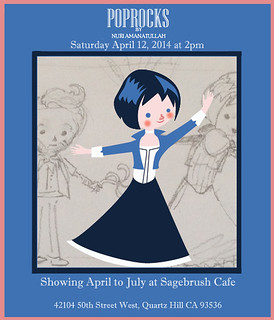 The show goes up on Saturday April 12 with an opening reception at 2 pm at Sagebrush Cafe.

AV Arts: What are a few sources of inspiration for your art?

Nuri Amanatullah: Comics, video games and movies is usually where I start. Whether it’s my own creation or a fan favorite, I usually use my childhood nostalgia as a springboard and go from there. I am a fan at heart. I grew up playing NES and reading comic books, drawing whenever I could, so for me it’s more fun than anything else.

AV Arts: Do you feel any specific affinities with art or artists working in outside the visual arts – writers, film makers, musicians?

Nuri Amanatullah: I love film and am an avid movie-goer. Also, architecture. I have always been an architecture enthusiast. The idea of creating a user-specific experience through the presentation of certain vantage-points or line of sights is not too different from film, actually. Architecture can be very cinematic whether it’s your view from the window or looking down the hall, it is a intended scene that was designed specifically for the viewer.

Nuri Amanatullah: I am in awe of Mondo’s film poster releases. They assemble the Avenger’s of illustration to pump out licensed, alternative movie-posters. Anytime I see the work of Kevin Tong, Mark Englert, Mike Mitchell, Laurent Durieux, Tom Whalen, Ken Taylor and Olly Moss, I instantly want to create.

AV Arts: Where did you draw inspiration for the characters in your PopRocks gallery show?

Nuri Amanatullah: Pop-culture is a such a huge realm now. For me, it starts with comics and branched outwards to video games and movies. All of the above mediums have undergone such a transformative change in the way we consume them. They persist far beyond the interfaces we used just a few years back. I feel this kind of permeable membrane that exists between these mediums opens the door for a visual smorgasbord that nerds like me can really geek out on. I can make a Bioshock themed print that is like the cover of a Little Golden Book I read growing up. We love to see different spins on existing characters. Who doesn’t love Steampunk or rockabilly Batman? It breathes new life into them and adds to their mythos.

AV Arts: What has been your personal experience with shows (gallery spaces, museum shows, etc.) in the Antelope Valley? 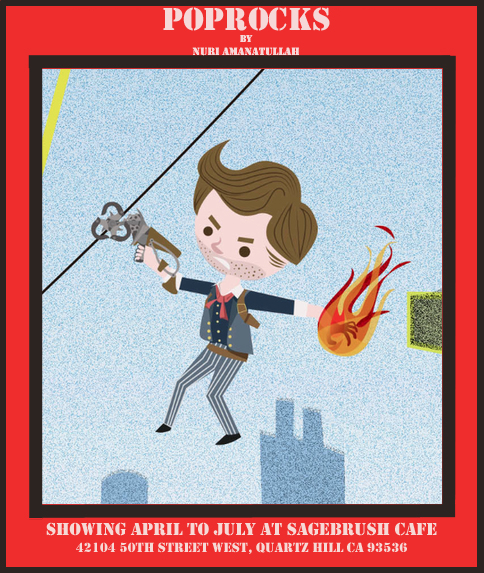 Nuri Amanatullah: I’ve been to a few and have met a number of extremely talented individuals. I see it as tinder-box of talent ready to ignite any moment. MOAH is helping with that. Places like Sagebrush help with that. Once people realize that there are venues, no matter how small, the potential to create rises because it can be seen, shared and talked about.

AV Arts: Has the Antelope Valley influenced your art in any way?

Nuri Amanatullah: Absolutely. The AV has definitely put a spin on my work. At the very least in terms of subject matter. It’s hard for me not to be influenced by my environment. The AV isn’t really on anyone’s radar in terms of design so it’s been fun to do some design-based work using my setting as a template. It has showed me what not to do and opened my eyes to what hasn’t been done here before.

AV Arts: Has your time teaching art workshops to kids shaped your art, shaped your view of what art can do, or helped to define for you the role of creative expression in social life..?

Nuri Amanatullah: It has and I think always will. I mentioned earlier I grew up drawing so getting exposed to art at a young age can be life changing. You never know what it will spark. Does everyone I teach end up becoming an artist? Far from it, but that’s also far from the point. If I can help a number of people approach their everyday lives just a little differently by thinking visually and critically about their experiences, I have perhaps at least stirredup something. If I haven’t opened a door then maybe I’ve cracked it a bit or at least unlocked it. And if one student does go on to continue creating art, that makes it all worthwhile.

AV Arts: How does the work showing in your PopRocks gallery show at Sagebrush Café compare to your other artwork? Is PopRocks representative of your work in general?

Pretty much. I’ve struggled a lot as an artist because my mind wanders. I am interested in so many mediums and artists it has been difficult for me to gain focus. I’ve done drawing, painting, sculpture, printmaking, writing, film—you name it, I’ve probably done it… all in the hopes of finding something I can sink my teeth into. The problem is that I love it all. Drawing has always been my bread and butter, but I am comfortable and feel proficient in most art forms to where if I get bored with one thing I can move to another. Sort of a jack-of-all-trades-master-of-none situation. I’m starting to get better at honing in on what I want to focus on, but in the meantime I’m going to continue doing work that I love.