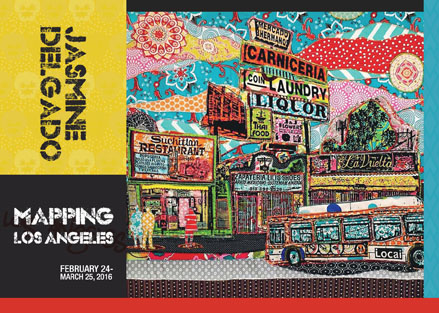 Describing herself as “a printmaker, educator, consumer and self proclaimed visual historian living and working in Los Angeles,” Jasmine Delgado is now showing work from a new project at the Antelope Valley College Gallery in Lancaster.

Her Mapping Los Angeles project is a brightly colored, sometimes psychedelic, sometimes decoratively styled, sometimes graffiti- and graphic arts-influenced collection of perspectives on the LA region, its landmarks and its neighborhoods. The grit and the history of Los Angeles are focal to the project as Delgado captures old hotels and local fast-food restaurants in ways that show how lasting the impact of the 1950s SoCal heyday is in LA.

The past is alive in the city of shadows. In this series, that past is presented in all its contradictory vibrance and decay as part of the contemporary landscape.

From the AVC Gallery page:

Los Angeles is a complicated network of neighborhoods, streets, alleys and freeways. Enthralled by the vibrant sights and sounds of the Los Angeles signage, architecture and iconography, Jasmine Delgado acts as a visual historian to document the strip malls, liquor stores, carnicería and machine shops that fill the landscape and provide colorful components of a complex metropolis constantly in flux. Ever since Delgado pulled her first print at a local community college in 1993, she’s been a diehard printmaker. Inspired by the generosity of working in multiples, her work evolved to include the language of spray paint, stencil and fabric to illustrate the impermanence of the LA urban landscape.