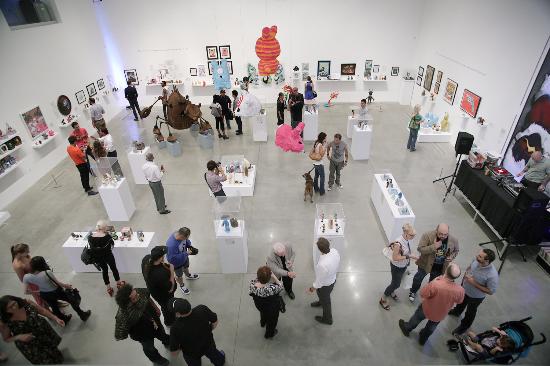 This event brings artists of the region together to show the varieties of artistic talent that calls the desert home. The opening reception for this show, which is kind of a big deal, in on Saturday, June 11.
There are certain events that tend to show just how many artists there are in the Antelope Valley and the surrounding area – – and it is a sizable group. But maybe because artists so often busy themselves making art, if you aren’t paying close attention it can be easy to forget or just not realize how much art is going on here.
This yearly event can be a corrective to that forgetting.

The Lancaster Museum of Art & History (MOAH) and MOAH:CEDAR are hosting the 31st Annual All-Media Juried Arts Festival, CEDARFEST, from Saturday, June 11 to Saturday, July 16. The festival and opening reception will be held on Saturday, June 11 from 4 to 8 PM.

One of last years’ prize winners was Marthe Aponte, an artist featured here. The CEDARFEST helped to launch Aponte into showing all over the place, both in the Antelope Valley and in Los Angeles. Who knows what will happen for this year’s winners…?

“Rebbecca Brown spent much of her formative years in the Antelope Valley, graduating from Palmdale High School in the early 1990s.  This Friday she will be reading from They Become Her, her first novel, which received Honorable Mention in the 2009-2010 Starcherone Innovative Fiction Contest. Dr. Brown’s poetry, fiction, and essays have previously appeared in American Literary Review, Confrontation, 88: A Journal of Contemporary American Poetry, Eclipse, Requited, H_ngm_n and Ekleksographia (among others).

DESCRIPTION of THEY BECOME HER

Humorously ardent and poetically rich, They Become Her tells the story of Delia Bacon, the first to propose that Shakespeare did not write his own works and whose own literary ambition inspired a life filled with fame, fervor, and scandal. In addition to Delia’s impassioned missive, three fictional biographies of contemporary writers – all sharing the name Rebecca Brown – are implicated in Delia’s quest. At the novel’s conclusion, it is unclear who is writing whose fictional biography. They Become Her provocatively questions identity, the relationship between texts and their authors, and the predicaments in which many artists inevitably find themselves. Along the way, it invites a self-reflexively enraptured entanglement with the reader herself, who won’t be able to resist playing along to the unexpected end.”

Don’t pass up an opportunity to participate, speculate and spectate. This is a unique event – worth keeping tabs on.

There is sure to be more to come in the lead up to the UFO SHO, but if you’re an artist there is no time to waste in getting your idea-generator going, scouring the alien catalog you’ve created and hidden in your garage, or polishing up that supernatural story you’ve been working on between late night visits to undisclosed places in the Mojave.

Submit your sightings for this upcoming Antelope Valley Arts show to:

We don’t have any more details, but when we came across this poster, it seemed like it had to go up for all to see.

We’ll have to leave the investigation up to you if you’d like to find out more.

This announcement was passed on to us at the AV Arts Blog from AV artist Larissa Nickle.

What would an exhibition look like completely divorced from curatorial subjectivity? What kind of discourse can rise from a group of artworks that is brought together, not by one person’s interests and preferences, but by chance, play, and perhaps a little divine intervention? As a way of thinking outside of a traditional relationship of dependency – artist on curator, curator’s discourse upon artwork – I propose a series of exhibitions that are brought together through an application of completely arbitrary systems. From this experiment, my hope is to ignite a different way of exhibiting, viewing, writing and thinking about contemporary art.
The first in this series of exhibitions is Written in the Stars, and will be configured based on the astrological charts of each artist who responds to this call. The collection of birthdates will be given to an astrologer who will select the participants based on each birth charts alignment with the opening date of the exhibition (October 20, 2014). Taking place at Antelope Valley College Art Gallery in Lancaster, CA, the show will be in the epicenter of a desert landscape in which metaphysical energies and practices are said to flourish. If chosen, each artist can contribute any piece of art they wish to show; the work does not have to speak to the astrology theme in any way. If you wish to be considered, please send the following materials to kellie.lanham@gmail.com by Monday, August 18th:
Kellie Lanham is a writer and curator working in Los Angeles. She is an editor and regular contributor toRECAPS Magazine and Haunt Journal of Art and holds an MFA in Critical and Curatorial Studies from the University of California, Irvine.
August 6, 2014August 6, 2014 ~ eric m martin ~ Leave a comment

This show is all about local folklore – stories of the Strange taking place right here in the Antelope Valley.

“ALRIGHT: UFO SHO is happening Sunday, September 14th. Check out this photo I took earlier this year. What kind of aircraft can change angles like that? All the answers and more will be at the UFO SHO.”

The UFO SHO is looking for people to contribute art work and stories based on out of this world stories that happened right here, in our own corner of the world.

Do you have a supernatural, spooked-out spooky or local oral tale that you’d like to depict in an art work, write down, or depict and write down? Are you interested in contributing and want to know more?

Send an email to poeticwax@rocketmail.com and we’ll connect you to the UFO SHO host/organizer.

West Coast Classical Presents…
A Night at the Movies
Friday, March 28 at 7:30 pm
An evening concert with a medley of James Bond title songs plus themes from some of your favorite movies.
Buy Tickets

West Coast Classical Presents…
A Night at the Movies
Saturday, March 29 at 7:30 pm
An evening concert with a medley of James Bond title songs plus themes from some of your favorite movies.
Buy Tickets

Barbara McNairy in Concert
No One Like You
Saturday, May 3 at 6:00 pm
Buy Tickets

West Coast Classical Presents…
A Night of Jazz
Saturday, May 17 at 7:30 pm
“An Evening of Jazz” will pay homage to some of the giants of jazz. Music will feature famous compositions by Duke Ellington, Sonny Rollins, Miles Davis, Benny Golson, Joe Zawinul, Oliver Nelson, John Coltrane and Kenny Garrett. This concert will feature the West Coast Classical Jazz Combo and the Jeff Kaser Quartet.
Buy Tickets

–
In its first five years Sagebrush has become a hub of local culture, hosting live music, book signings and book release parties, and numerous gallery shows. The list of local artists who have displayed work in the west side coffee shop is now a rather long one:

On Saturday, April 5th 2014, the Quartz Hill coffee shop will play host to an arts and crafts event featuring local artists and artisans who will be offering their wares in an outdoor market on the grounds of the coffee shop (no pun intended), where patrons can peruse recycled furniture, hand-made wooden bowls, hand-made soaps, and more while sipping on some of the AV’s best coffee.

Because it’ll be great.

“Contexts” – On display at the Edward’s Airforce Base Library

Words and color and the intimacy of portraiture comprise the principal elements of Milham’s latest series, DISTANT RELATIVES.

Martin’s collage work poses the synthetic geometry of printed text along side natural and drawn shapes.

Catch up with them at Sagebrush Café on 50th Street West (x Ave. L-14) in Quartz Hill.    http://www.sagebrush-cafe.com

[Thanks to Edwin Vasquez for arranging the show.]